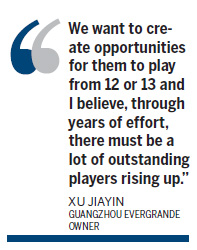 GUANGZHOU, Guangdong - Real Madrid isn't missing any tricks in its attempt to make inroads in China.

The club already has Cristiano Ronaldo, Kaka and Iker Casillas on its side to attract hardcore fans. Now, it will bring its power to bear on young players, with the announcement that it will open what it hopes will become the largest soccer school in China, geared toward 12 and 13-year-old players.

"We are planning to build the biggest soccer school in Asia in China," said Xu. "I hope Real Madrid will give us its full support, especially in sending foreign coaches here to improve the level (of play) of Chinese teenagers."

Xu, who bought the Cantonese club for 100 million yuan ($15.4 million) in March of 2010, has vowed to win the AFC Champions League in three years.

Perez said he regards the school as the first step of a long-term partnership.

"We hold the belief that soccer should start from the youth, thus we join hands with Mr Xu to set up this school," Perez said. "Real Madrid will provide Guangzhou with as much support as we can and I believe our cooperation will become deeper and closer in the long run."

With 41 points, Chinese Super League's most expensive lineup is nine points ahead of second-place Beijing Guo'an after 17 games.

Xu said the new school will enroll 3,000 children next year, and plans to enroll as many as 10,000 in the near future.

The young players will receive cultural lessons similar to those in normal Chinese middle and high schools.

"China is a big country ... and has many talented kids who love to play soccer," Xu said. "We want to create opportunities for them to play from 12 or 13 and I believe, through years of effort, there must be a lot of outstanding players rising up.

"I hope with the cooperation of the two clubs, all the coaches of this school will come from Real Madrid - this is our biggest advantage," said Xu..

"We also know there are many talented children in China whose families can't afford the tuition of our school, therefore we decided to donate 100 million yuan per year to China Foundation for Poverty Alleviation in the next 10 years, " Xu said.

"The money will be used in supporting teenagers at our soccer school and college undergraduates who live with financial difficulties."