BETHESDA, Maryland - Only one thing was missing from Rory McIlroy's breakthrough win in a major at the US Open on Sunday - there was no Tiger Woods.

Not that that his absence through injury took anything away from the quality of the Irishman's performance - one that inevitably evoked memories of Woods' own masterpiece at the 1997 Masters.

When another Irishman, Padraig Harrington, won back-to-back majors in 2008 at the British Open and PGA Championship, some added the asterisk to the achievement that Woods did not play, again due to injury.

This time, with Woods in a dire slump, most believe his presence would not have made any difference.

Still, there is now the mouth-watering prospect of McIlroy versus Woods, if the American can overcome the knee and ankle injuries that have sidelined him since the Masters in April.

It is a prospect that McIlroy relishes.

"I've watched Tiger over the last 15 years. It would be great," said McIlroy, who at 22 is 13 years younger than the American.

"When I was growing up, I always had putts to win against Tiger Woods in the Masters or US Open.

"So it would be great to be able to get in contention one day, whether it be a major or just a regular event and go down the stretch with him because I've never really had that experience before.

"As I said, hopefully he can get healthy and can get back playing good golf, because the game of golf is a better place with him playing well."

That encounter could happen as early as next month with the next of the majors, the British Open, which this year is being held at Royal St George's in Kent.

But for the moment it is not certain that Woods will be fit enough to take part on a course where he struggled the last time the Open was held there in 2003.

McIlroy said he would take three weeks off and then focus his attentions on preparing for the year's third major, where he will be among the favorites, having come close last year at St Andrews.

He opened with a 63, equaling the lowest-ever round in a major tournament, but ballooned to an 80 the following day as the winds blew and eventually finished in a tie for third behind winner Louis Oosthuizen.

"There's two more (majors) left. I said after Augusta, there's three more majors left, I'll try and go out and win one of them. I've done that.

"There's two more majors left. I'm going to try my best and go out and put myself in a great position to win them also."

But McIlroy was quick to douse talk of him matching Woods' haul of 14 majors or even approaching the holy grail of golf, the 18 majors won by Jack Nicklaus.

It is all far too early and premature to enter into that kind of talk, he insists.

"I don't think you can think about it. It's only people saying these things," he said.

"I obviously want to add to that tally. But you can't let what other people think of you influence what you have to do. 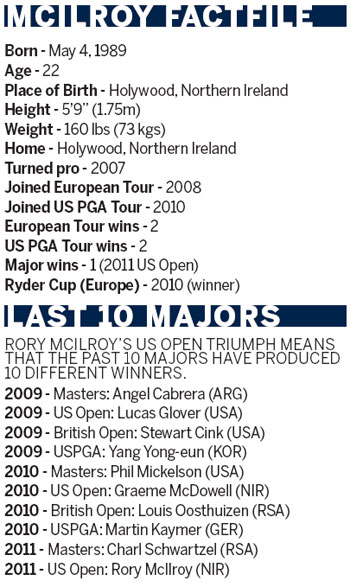