Time for families to have two children each

China needs to allow more people to have a second child to prevent the risks brought about by drastic demographic changes, Li Jianxin, an associate professor of demography studies at Peking University, tells China Daily's Ku Ma. Below are excerpts from the interview.

Many demographers insist that the government should continue its tight control over population growth. Their conclusion is based on the fact that China has the largest population, 1.3 billion, in the world, which will continue to be its biggest problem for decades.

But it is equally important to pay attention to the demographic structure. If the government continues with its strict one-child policy for the majority Han people, the country will be burdened with an aging population and a decreasing workforce.

In the early days of the People's Republic of China, Chairman Mao Zedong encouraged people to have more children, a move widely criticized today. But, just as Mao stressed, more people does not mean only more mouths to feed, but also more hands to work.

Later, Deng Xiaoping led the people toward prosperity with his reform and opening-up policies. But without the readily abundant labor force at the country's disposal China could not have achieved that miracle.

There is no reason to believe that China's population should be allowed to grow infinitely. But then there is no reason, either, why it should not increase slightly. Facts show that the national economy would stagnate if population growth were to be negative or restricted to zero.

Even if the government were to adopt a two-child family policy, China's population would still see a moderate decline after reaching its peak in the middle of this century. So some experts' fear that a two-child policy would cause a population explosion is far from justified.

The general response of the people to the existing population is difficult to gauge. Some opinion polls show many young couples are willing to have a second child. But willingness is quite different from actually having one, for it's not rare to see some young couples who initially were desperate to have babies abandon the thought because of huge costs involved in raising a child.

The government should have an overall view of the population problem. The truth is, the birthrate today is much lower than that needed to maintain the existing population. This could lead to unexpected consequences. For example, a sharp decline in the workforce would be a setback for sustainable economic development.

The US has maintained its vigorous economic power for a long time, because its population has many advantages, such as age structure and constant supply of labor, over that of Western European countries and Japan.

China has to be far-sighted with its population policy, too, to meet structural challenges. An ideal scenario would be: No abrupt decrease in the workforce and keeping the aging of population under control for 20 years.

A large population, no doubt, puts pressure on China's natural resources and environment. But the size of the population is not the fundamental reason behind environmental destruction. Take greenhouse gas (GHG) emissions for example. The US, with just over 300 million people, emits as much GHGs as China if not more, whose population is four times greater.

Environmental problems are more closely related to the development model of a country and the lifestyle of its people. No country can improve its environment by only decreasing its population.

Moreover, a low birthrate influences the family structure. In the future, we may see more families with four seniors and two younger members and one child, which is a risky proposition socially and psychologically. That's why a comparatively loose two-child policy is needed. Besides, such a policy would help balance the gender ratio, too. But some experts dismiss the relation between the existing family policy and the extremely unbalanced gender ratio of more boys than girls.

As for the controversial subject of "proper" population size, different scholars and researchers have different views because of their different backgrounds and research methods. But what happens if their crucial views turn out to be pseudo-propositions? The figure-oriented population notion would become meaningless.

In other words, a far-sighted comprehensive outlook on the population problem should replace the outdated practice. Hence, the decision-makers need to pay more attention to the urgent problem of population structure for healthy economic and social development. 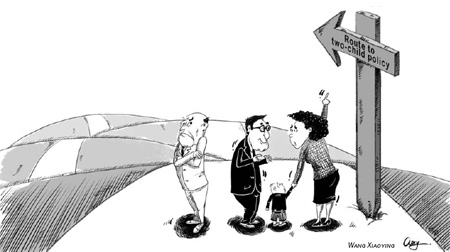 Plant offers much food for thought

When there is more to it than dog meat