On September 2, 1945, Japan formally signed the instrument of surrender aboard the USS Missouri in Tokyo Bay, marking the end of World War II. But the countries that were invaded still needed decades to come over the agony and trauma caused by the horrendous crimes that Japan committed during the war. Now that 77 years have passed, some Japanese politicians seem oblivious to Japan's aggressions, its historical responsibilities and the dangerous course that only harms regional peace and stability.

On August 31, Japan's Ministry of Defense requested 5.59 trillion yen ($40.4 billion) for fiscal year 2023, the 11th consecutive rise under the Liberal Democratic Party-led government and the highest figure ever. Prime Minister Fumio Kishida pledged to drastically increase Japan's defense outlays over the next five years, and consider "every option" to boost defense, including acquiring the capability to strike enemy bases. To achieve this goal, the Kishida administration is in the process of revising all three of the country's key security policy documents by the end of 2022, namely the National Security Strategy, National Defense Program Guidelines, and Medium-Term Defense Program.

giving Japan the green light to exercise the so-called right to collective self-defense. In 2015, a series of new security laws were forced through parliament controlled by the ruling coalition and implemented in the following year. On May 1, 2017, the Japan Maritime Self-Defense Force, for the first time, dispatched the JS Izumo aircraft carrier to escort American warships. In 2021, the Japanese government bypassed the "Three Principles on Transfer of Defense Equipment and Technology", greatly eased the restriction of Japan's export of weapons and military technology. Japan has been going further down the path of military expansion by significantly ramping up defense expenditure, vigorously developing anti-missile, space, hypersonic weapons and other military technologies, strengthening military cooperation with the US, and seeking to develop the so-called counterstrike capabilities.

All Japan's attempts to challenge the post-war arrangements to which it once promised to adhere to have been partly endorsed or at least acquiesced to by its most significant ally, the United States. It is no secret that Japan has been a crucial tool in America's geopolitical and military strategy in the Asia-Pacific. As the US rolls out its Indo-Pacific Strategy, Japan is expected to play a bigger role in the allied network of the US to encircle China. Even back in World War II, the US chose to appease Japan when it fitted US own interests. As recorded by American radio service VOA, before 1939, "much of the metal, oil, and other materials that Japan used for its war in China came from the United States". In Northeast China, Japanese troops waged a heinous germ warfare against the Chinese people, secretly conducting living-body experiments and developing bacteriological weapons. According to The New York Times, "the research was kept secret after the end of the war in part because the US Army granted immunity from war crimes prosecution to the doctors in exchange for their data. Japanese and American documents show that the US helped cover up the human experimentation. Instead of putting the ringleaders on trial, it gave them stipends".

Although an East Asian country, Japan sees the Russia-Ukraine conflict another opportunity for it to expand military power and strengthen security cooperation or alliance with countries outside the Asia-Pacific. The participation of the Japanese prime minister in the June 29 NATO Summit this year marked the first time that a Japanese leader joined NATO meetings. During the summit, Kishida said the security and defense of Europe and the Indo-Pacific are inseparable, and it welcomed greater input from NATO to the Indo-Pacific. Japan has a strong sense of crisis that "Ukraine today may be East Asia tomorrow".

That Japan has barely shown deep and full repentance over its aggression and war crimes in World War II, and that it has been trying to change its political and military status is the major destabilizing factor for East Asia and the Asia-Pacific. It must realize that the Pacific is supposed to be an ocean of peace, not a place for Japan to make waves. 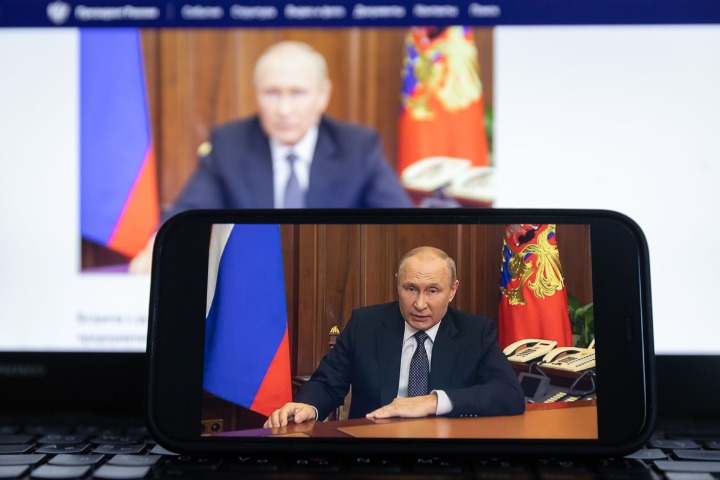 Children paint a bright future for China, Japan and S.Korea
Most Viewed in 24 Hours
Forum trends