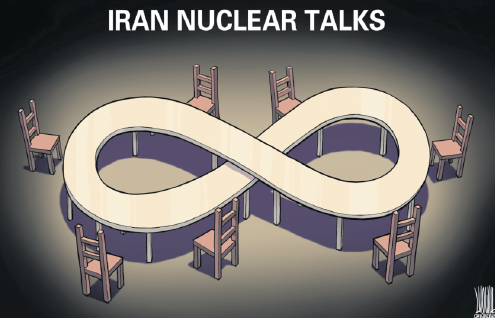 With the Joe Biden administration seemingly signaling a willingness to return to the Joint Comprehensive Plan of Action, also known as the Iran Nuclear Deal, and the recent changes of Iranian and Israeli governments, the Iranian nuclear issue is now at a critical juncture. Whether the ongoing Iran nuclear talks in Vienna will succeed and where this issue goes will have a significant impact on peace and stability in the Middle East, global security, and relations between major countries.

During his presidential election campaign, Biden promised a return to the Iran policy adopted by the Barack Obama administration, which was to use a strict nuclear agreement to restrain Iran's nuclear capability and prevent it from developing nuclear weapons.

The United States' considering a return to the Iran nuclear deal is a bid to repair and strengthen relations with its allies. After all, the Donald Trump administration's decision to withdraw from the deal in 2018 was one of the many reasons that divided the US and its allies.

The Biden administration also needs to prevent the issue from spiraling out of control and plunging the US into a new crisis. Israel was extremely concerned when Iran backed off from the nuclear deal and began upgrading its nuclear capabilities after the US withdrew from it in May 2018. If the deal is not restored, Iran will continue to develop its nuclear capabilities, leading to the prospect of Israel using force against Iran and plunging the Middle East further into war. The US would then become embroiled in this war, affecting its global strategy.

From the US perspective, returning to the nuclear deal could also put a brake on the cooperation between China and Iran which have just reached a 25-year comprehensive cooperation agreement. If the deal is not restored, an isolated Iran will turn to China and Russia for stronger strategic cooperation, especially on "de-dollarization", a major threat to US global interests. However, if the deal is reinstated, Iran will improve its relations with the West and seek to balance them with its relations with China.

As a major oil producer, Iran's economy and Iranian livelihoods rely heavily on oil exports. The sanctions on oil exports and finance imposed by the US and other Western countries over the nuclear issue have, as expected, seriously hit Iran's socio-economic development and are pushing it to accept some of the harsh conditions the US is proposing.

Following its withdrawal from the deal in May 2018, the US reimposed sanctions on Iran and took "long-arm jurisdiction "actions, which greatly hit Iran's oil exports. According to Reuters, Iranian oil exports plummeted from 2.5 million barrels per day that month to 300,000 barrels per day in June 2019.

With 40 percent of Iran's fiscal budget coming from oil exports, Iran needs to export about 1.54 million barrels per day (at $54/barrel) to keep its economy running. Therefore, Iran's primary goal is to restore the nuclear deal and lift international sanctions in order to resume normal economic development, while preserving its right to enrich uranium. At the same time, Iran can use this opportunity to improve relations with the West to create a better external environment for more investment and trade.

The Iran nuclear deal is the result of long and arduous negotiations among China, France, Germany, Russia, the United Kingdom, the US, the European Union and Iran, endorsed by the UN Security Council. Therefore, the resumption of negotiations should focus on the "road map" to bring both parties back to the deal, rather than on the deal itself. However, the US is proposing new conditions and seeking to gouge more for a "return", which is proving to be the biggest hurdle to the negotiations in Vienna.

The US tabled a stronger version of the deal, going so far as to include non-nuclear issues such as Iran's ballistic missile development and support for regional militia organizations, which were firmly rejected by Iran. With the inclusion of these two non-nuclear elements in the agreement clauses ruled out, the US proposed that Iran destroy the new generation of centrifuges that are now in operation, the latest achievement in Iran's nuclear technology development, and only keep the old centrifuges within the scale stipulated in the deal. This is now the crux of the matter.

When the nuclear deal was reached in 2015, the West believed that there was no need for Iran, a country with huge oil reserves, to develop nuclear energy unless it had another agenda. Today, as the existing energy structure undergoes transition toward a clean energy mix, the economic strategies of oil-producing countries will be impacted as oil gradually loses its position as the staple energy resource. Against the backdrop of carbon neutrality, Iran's eagerness to develop nuclear power is much easier to understand.

Since the US has to abandon the approach of including non-nuclear elements in the deal, the success of the deal will be determined by two factors. The first one is to what extent Iran will accept the strings attached to its nuclear development. This will be determined by the aforementioned change of the Iranian government and carbon neutrality.

The second factor is how far the US is willing to go in lifting the sanctions against Iran. The US claims that even if the Iran nuclear deal is reinstated, not all of the sanctions imposed on Iran since the Trump administration will be lifted, including those related to non-nuclear issues such as alleged violations of human rights and international rules.

Iran, on the other hand, insists that all oppressive sanctions must be lifted. The US and Iran have yet to bargain over the scope of the US sanctions against Iran to be lifted. At the same time, given the US administration's habitual flip-flopping and poor political credibility, Iran's efforts to seek guarantees from the US and other Western countries regarding the Iran nuclear deal may turn out be in vain.

But from the perspective of the primary interests and concerns of the US and Iran and the overall situation, it is to be hoped that the US and Iran will make tactical concessions and meet somewhere in the middle and reinstate the Iran nuclear deal, for such an agreement will help address broader strategic issues between the two sides.

The author is deputy director of the Institute of World Economics and Politics at the Chinese Academy of Social Sciences.