In the coming months, some of the worst collateral damage of US tariff wars will occur in sub-Saharan Africa. The adverse impact is likely to be aggravated by US protectionism, which shuns economic integration in Africa.

After US tariff wars undermined the global recovery momentum in 2018, the World Bank projected in June that the world economy would only expand by 2.6 percent. The International Monetary Fund (IMF) has affirmed the trade wars could wipe $455 billion off global GDP in 2020.

The adverse impact on sub-Saharan Africa is reflected by downgraded projections. In April, the World Bank cut the 2019 growth forecast for the region to 2.8 percent from 3.3 percent.

Until the commodity price slump of 2015, Africa enjoyed a decade of rapid growth. The recovery of those growth levels could take long, due to the decline in industrial production and particularly as the US-Sino trade war is taking its toll.

Indeed, the collateral damage in Africa is about to begin.

Recently, Akinwumi Adesina, president of the African Development Bank (AfDB) warned that the US-China trade war and uncertainty over Brexit pose risks to Africa's economic prospects that are "increasing by the day."Such prospects are also fueled by a recession in Germany.

Indirectly, the diminished prospects are reflected by three major economies - Nigeria, South Africa and Angola - that make up about 60% of sub-Saharan Africa's annual economic output. At the moment, all are coping with various challenges, curbing their contribution to the growth momentum.

Although Africa is not the direct target of the US-Sino trade war, US tariffs have typically heralded plunging commodity prices, local currencies and major equity exchanges. Earlier in the year, AfDB warned that the trade conflicts could result in a 2.5 percent reduction in the GDP of resource-intensive African countries and 1.0 percent reduction for oil exporters in the next two years.

As US tariffs and diminishing global prospects slow down Chinese production and thus reduce Beijing's demand for raw materials from Africa, the prospect of slowing Chinese demand could further reduce annual exports from Africa.

Disruptive changes in US and Chinese trade and FDI

Since December 2018, the Trump administration's new "Africa strategy" has stressed three priorities: advancing US trade across the region, combating terrorism and aid reduction in the name of efficiency. The first tenet is reflected by the 'Prosper Africa' initiative, whose stated goal is to substantially increase trade and investment between the US and Africa.

Yet, to understand the real economic role of the United States and China in Africa, it is instructive to take a long view. Let's start with trade. Between the end of the Cold War and the onset of the Bush era, US exports to and imports from Africa were less than $1 billion annually. Africa was non-existent to Washington. In the same time period, Chinese exports to Africa more than quintupled to $6 billion, whereas imports from Africa increased even faster, almost 10-fold to over $4 billion.

Prior to global crisis, US trade soared to $100 billion, falling only $2 billion behind that of China. While Chinese trade with Africa was balanced, US trade wasn't. America imported 2.5 times more from Africa than it exported to Africa.

Until the end of the commodity super-cycle and the collapse of energy prices, Chinese trade soared to more than $200 billion in 2015. After the subsequent plunge, it returned to $155 billion in 2017. Meanwhile, US trade plunged to $50 billion and remains only $55 billion annually. China's trade surplus with Africa is about $35 billion, whereas US trade deficit with Africa is almost $13 billion. The former has led to some discontent in Africa; the latter is unacceptable to Trump's trade hawks.

In the 2018 Forum on China Africa Cooperation (FOCAC), President Xi Jinping pledged $60 billion to the continent in loans, grants, and development financing. That's when the Trump administration developed its "new Africa strategy," which is constrained by trade protectionism and longer-standing US geopolitical goals.

Differences of US and Chinese presence in Africa

Initially, the Bush administration did push for Africa's economic self-reliance, but its "war on terror" offset that goal.

The Obama administration's rhetoric failed to disguise the dramatic collapse of US trade and investment in Africa in the mid-2010s.

In 2014, the US pledged to invest $14 billion in Africa over the next decade. With the most protectionist administration since the 1930s, this may prove unlikely. The Trump administration's penchant for trade wars shuns efforts to contain collateral damage in Africa. Remedies simply aren't viable as long as protectionism remains the White House's primary weapon.

Moreover, the $252 million funding cuts to Ebola response efforts in early 2018 illustrate the gap between the stated goals and effective actions. Finally, expectations should also be cautioned by the Trump administration's racial bias.

For all practical purposes, the US Africa strategy is largely dictated by the concern that China has become Africa's largest economic partner. That's why Washington misrepresents China's Belt and Road Initiative (BRI) in Africa and elsewhere.

In the postwar era, US-led globalization did not occur without significant mistakes. In the early 21st century, the BRI is going through its own birth pains. But unlike past globalization, the BRI seeks to boost industrialization in emerging and developing countries - that is, countries that have been largely ignored by the advanced West.

In the final analysis, economic development is a win-win game; geopolitics isn't. Africa is a case in point.

Dan Steinbock is the founder of Difference Group and has served at the India, China and America Institute (US), Shanghai Institute for International Studies (China) and the EU Center (Singapore).

This commentary was originally published by China-US Focus on August 29, 2019. The opinions expressed here are those of the writer and do not represent the views of China Daily and China Daily website.

Myths busted: Facts and fiction about the novel coronavirus 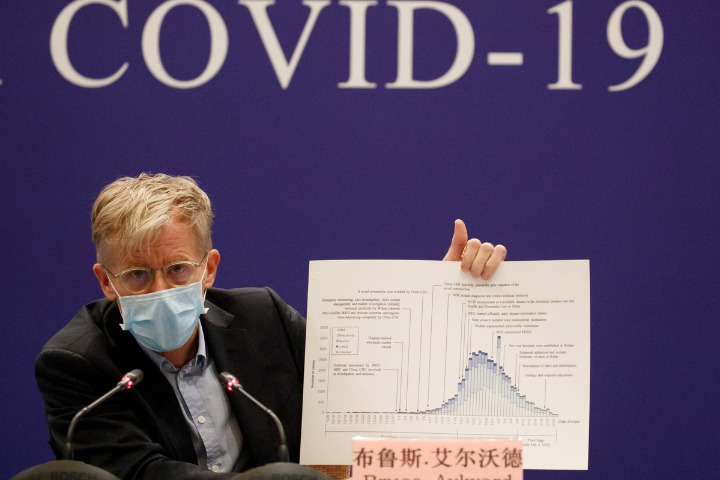