About 150 turtles crawled onto the tarmac at New York's JFK airport on Wednesday in search of beaches to lay their eggs, delaying dozens of flights, aviation authorities said.

The slow-motion stampede began about 6:45 am, and within three hours there were so many turtles on Runway 4L and nearby taxiways that controllers were forced to move departing flights to another runway.

"We ceded to Mother Nature," said Ron Marsico, a spokesman for the Port Authority of New York and New Jersey, which owns the airport.

Workers from the Port Authority and the US Department of Agriculture were scooping up turtles and moving them across the airport, he said. Flight delays averaged about 30 minutes, the Federal Aviation Administration (FAA) said.

The migration of diamondback terrapin turtles happens every year at John F. Kennedy International Airport, which is built on the edge of Jamaica Bay and a federally protected park. In late June or early July the animals heave themselves out of the bay and head toward a beach to lay their eggs.

The peak of the migration usually lasts a few days, Marsico said.

Several pilots, some of them stifling chuckles, began reporting turtles on Runway 4L just as the morning rush hour was beginning at JFK, according to a radio recording posted on LiveATC.net.

"Be advised 30 feet (10 meters) into the takeoff roll, left side of the centerline, there's another turtle," called the pilot of American Airlines Flight 1009, a Boeing 767 that had just taken off bound for the Dominican Republic.

American 663, a Boeing 737 headed to Fort Lauderdale, found its way to Runway 4L blocked by three of the roving reptiles. After ground crews removed them, the plane taxied into takeoff position, received takeoff clearance - and was blocked by more turtles.

Female diamondback terrapins can grow up to 23 centimeters and weigh up to 1.4 kg.

Wayward wildlife is a serious concern at JFK and nearby LaGuardia Airport, which both sit on shorelines populated by geese, turtles, ducks, frogs and other animals.

In the past year, planes at JFK have collided with gulls, hawks, swans and an osprey, according to the FAA's database of wildlife strikes.

The main concern is for the turtles themselves, Marsico said. He said crews were loading the turtles into pickup trucks and giving them rides to the nesting beaches. 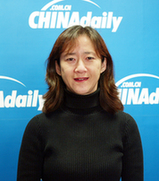 Nelly Min is an editor at China Daily with more than 10 years of experience as a newspaper editor and photographer. She has worked at major newspapers in the U.S., including the Los Angeles Times and the Detroit Free Press. She is also fluent in Korean.