Vice-Premier Wu Yi yesterday called upon the United States to ease its restrictions on exports of some hi-tech products to China to help narrow the trade gap.

The remarks came in an opinion piece on the Asian edition of the Wall Street Journal, days before she leads a delegation to Washington for the second round of a strategic economic dialogue - the highest platform of communication between the two countries. 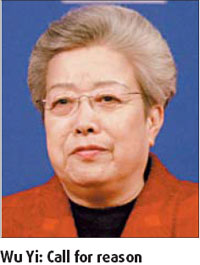 "The United States, as a global leader in science and technology, should give full play to its comparative advantage, enhance mutual trust and relax export controls to boost the competitiveness of American companies, reverse the trend of dwindling market share of American hi-tech products in China, and reduce its trade deficit with China," she urged.

The US administration has been adopting a strict export control policy on hi-tech exports to China for "security reasons", which has hindered China's imports from the country. Washington drafted a new rule in July, stipulating license requirements for additional items defined as "military end-use", and making the procedure of applying for licenses more complicated.

She called such moves "irresponsible acts" that obstruct globalization and hinder the interests of both China and the US as well as the growth of the world economy.

"China and the United States need to, based on our respective national conditions, properly address issues arising in the course of our respective economic adjustments and resolve bilateral economic and trade issues through enhanced dialogue and consultation, and in a reasonable manner," she said. "Attempts to politicize trade issues should be resisted."

Wu said China-US business and trade relations are "cooperative in nature" and said she expected the two sides to address disputes and problems in "a coolheaded, objective and responsible way".

"Mutual benefit and win-win progress remain the defining features of our trade ties. This is the larger picture that no problem can overshadow," she added.

The issues of export control and easing of protectionism in the US are expected to be the major topics of the strategic economic dialogue in Washington next week. The talks will also touch upon other issues, including services, investment, energy, environment and innovation.

The China-US dialogue, which was jointly initiated by the two countries' presidents in September 2006, is an important channel for the two to discuss economic issues concerning the overall strategic and long-term interests, and address, as appropriate, contentious issues in bilateral economic relations.

Despite economic conflicts, China and the US have witnessed strong growth in bilateral trade and investment, becoming each other's second-largest trade partner from an "almost nonexistent" trade volume 35 years ago.