News has been coming thick and fast. Most of it worrying. That this is one of the hottest summers on record is news, but not new. The past few summers have been equally bad, if not worse. What's worrying is that extreme temperatures melted many roads into black goo in the United Kingdom last month－something that is becoming common in the West.

What's even more worrying is a new study that says the world's largest ice sheet faces a dreadful future, for its fate rests in the hands of humankind (read big corporations and global leaders). If global warming drives temperatures above 2 degrees Celsius, the East Antarctic ice sheet could melt, pushing up sea level by many meters.

East Antarctica holds the vast majority of the Earth's glacier ice, which climate scientists thought was stable. But now it is showing signs of being extremely vulnerable to climate change. And if all of it melts, scientists say, sea levels would rise by 52 meters.

As for the Greenland ice sheet, which could cause a sea level rise of up to 7 meters, it is on the brink of a tipping point, scientists have warned. Sea levels are already rising faster than they have done for about 3,000 years, because mountain glaciers and the Greenland ice sheet are melting at an unprecedentedly fast rate, and ocean waters are expanding as they heat due to global warming.

And even a couple of meters of sea level rise could spell disaster for the world, coastal regions in particular, including iconic cities such as New York City, Shanghai and Mumbai.

Before the mind-numbing study highlighting the heightened threat to the East Antarctic ice sheet was published, on June 26 to be precise, came another piece of shattering news. After discussing and negotiating issues of global importance amid a tense atmosphere, the representatives of 196 countries concluded the fourth meeting of the open-ended Working Group on the Post-2020 Global Biodiversity Framework at the UN Environment Programme building in Nairobi on a disappointing note.

Instead of reaching consensuses on many of 23 targets included in the framework's document, as was expected, the delegates agreed on only two. The fact that the Aichi targets lapsed in 2020 makes the failure of the Nairobi meeting even more disheartening. The UN Convention on Biological Diversity had adopted the targets at a conference in Aichi, Japan, in 2010 to protect biodiversity which underpins global food security, clean water and people's health.

The expected global deal to halt biodiversity loss dissolved into disagreements despite the Intergovernmental Science-Policy Platform on Biodiversity and Ecosystem Services emphasizing on many occasions that declining in biodiversity poses a generational threat to humans.

The Global Biodiversity Framework has been designed to revive species loss and reconceive the Aichi targets in the post-2020 period by, for example, increasing the coverage of terrestrial and marine protected areas, introducing better regulations and policies for sustainable development, and protecting biodiverse species.

The two targets the delegates agreed on are Target 19.2, to strengthen capacity-building efforts and development, and Target 12, to create more green and blue spaces in urban and densely populated areas.

Of special concern is the fact that, due to advances in biotechnology, corporations no longer need to have physical access to, for instance, plants. To extract the plants' genetic value, they can use their digitized genetic information. The result: big companies could reap all the profits even if they depend on, but without contributing to, the traditional knowledge of Indigenous and local people.

Yet another bit of disturbing news is the possibility of climate change disrupting ecological cues, which prompt animals to migrate. What can be disturbing about that, you may ask. When animals, including butterfly kaleidoscopes or elk herds or bat cauldrons, migrate, they do so in response to ecological cues, which guide the manner and extent of the migration process.

That climate change will deal a terrible blow to migratory species is tragic enough. But, worse, as a recent study in Nature shows, the disruption will lead to unusual interspecies contact, which could cause new transmissions and mutations of viruses.

As such, aside from having a massive ecological impact on the global fauna, it could seriously impact human health, for the majority of emerging infectious disease threats are zoonotic (transmitted by animal-to-human contact) in origin.

The study suggests we could be on the cusp of a mass-scale viral transmission event.

Now to the moral of the story: the international community has no choice but to put its heads and hearts together, forget about power and profits, chicanery and charade, trick-or-treat, and work together to keep global temperature rise to below 2 C. The tragedy is that these evil traits have become part of the DNA of some countries and corporations.

Only a few economies such as China and the European Union have been doing enough to tread the course to a healthy planet.

Until the pretenders shed their sheep's clothing, repent for their sins, start believing that Earth is the only place they can call home and without it there won't be any power or profit, and work to improve its health, we are in for dark times.

Help the poor to adapt to global warming 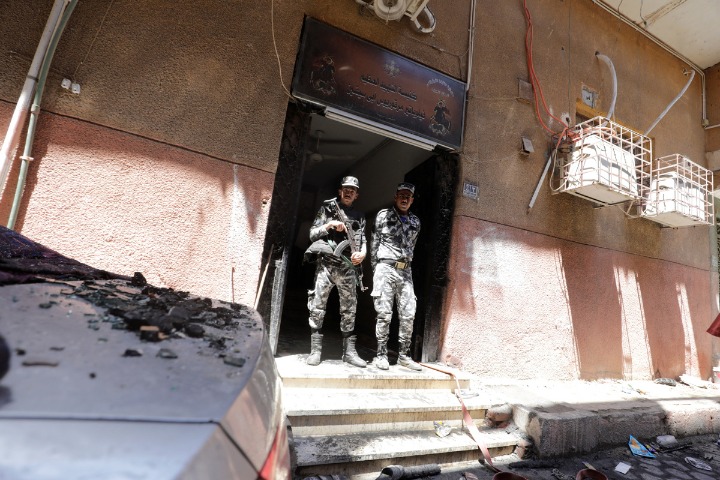