Motives behind US blame game are clear

The state of New York in the US has been hit the worst with the coronavirus. Based on latest numbers for the whole country over 1 million people have been infected and over 70,000 have died thus far. It doesn't look like that it is over yet as new infections and deaths are reported every day.

This is not surprising because the US government has been busy with organizing a regime change in Iran and Venezuela and focused on blaming China for the pandemic. Instead of focusing on fighting and containing the virus from spreading and killing people.

I read world news every morning while drinking my morning coffee with melted dark chocolate and hot milk. Some days I read it twice a day, once in the morning and once in the evening. The whole planet seems consumed with the coronavirus and this is what the news is all about, no matter what time of the day you read it.

The virus continues to infect and kill people all around the globe. Some governments have reacted to the pandemic very quickly and took drastic measures to contain the virus from spreading any further than it could.

But others took their time with their decision-making and missed their golden opportunity in containing the spread of the virus among the population.

It seems the entire world is fighting the virus in solidarity, apart from the US. The US government is blaming other countries, namely China, for the spread of the virus. And over the past week it has intensified the virus blame game. The US government has been trying hard to divert the attention of its citizens toward China rather than admitting its mismanagement of the situation. It is a dangerous path to take as it could create racial confrontation and racism toward Chinese Americans in the US and Asians in general.

I have watched and read online news of how US President Trump and Secretary of State Pompeo blame China for the pandemic and accuse China of "not being transparent with their data", "not informing the world earlier about the virus" and saying "it could have been contained in Wuhan".

It is hard to predict the US government's intentions on blaming China for the pandemic. But it isn't hard to guess the real reason behind it. Trump spoke against China's rapid economic development even before he became president of the US. He has intensified his China rhetoric tenfold after becoming president.

He initiated his infamous "trade war" with China and I believe that this virus blame game is a continuation of that "trade war". It is a different tactic but with the same aim and objective, which is to bring down China to its knees by any means. As indeed it was done to the former Soviet Union in the late 80s and early 90s.

There are several reasons for the US government blaming China for the coronavirus pandemic, and they have absolutely nothing to do with the virus at all.

The first reason is fear.

It is the fear of losing influence, (political and otherwise) over some countries in the Asia-Pacific in particular and around the world in general. It is fear of losing influence over countries which have looked up and turned to US governments for financial, economic, military and political support. It is the fear that these countries will turn to China for above-mentioned support, which many countries all around the world have already done.

The second reason is economic.

China's economy has been growing no less than 7 percent year-on-year since 2000. The Chinese government has, over the years, managed to lift millions of its citizens out of poverty. With the Belt and Road initiative the Chinese government has been investing billions of dollars overseas, building not walls, but bridges, schools, hospitals, roads and infrastructure in the countries that are part of the project. It is this reason that the US government is playing the pandemic blame game.

The third reason is political.

Many countries around the world turn away from the US government and turn toward the Chinese government for political and diplomatic support, which irritates some people in the Pentagon and the White House. Hence the pandemic blame game by the US and its proxy allies UK and Australia. The aims and the objectives of these countries' governments are to tarnish the political reputation of the Chinese government around the world, and this pandemic provides the perfect opportunity for them to do just that.

The fourth reason is the fear of not getting elected for a second term or the fear of losing the presidential election in November.

Trump and his government know that they handled the pandemic very badly. There are over 30 million people unemployed in US. There are families who have no income and are struggling to put food on the table to feed their children. There are over 1 million people infected with the virus and over 70,000 who have died. Therefore Trump and his government know that all the shortcomings and mismanagement of the virus outbreak in the US will be remembered by the people when they go to the polls to elect their next president in November this year.

Trump is using the COVID-19 pandemic blame game to divert people's attention from himself and from the terrible situation with the virus in his country to China.

The coronavirus has spread to almost every country in the planet. People around the world watch and follow the response of their respective governments in handling and managing the outbreak in their respective countries.

That is to say that respect to the Chinese government has increased a thousandfold around the world for the way it handled the outbreak and the way it did it. I know it, I witnessed it, I saw it and I was part of it.

The respect to the Chinese people has also increased greatly around the world for coming together as one nation and fighting the virus outbreak united in their mind and action, as all for one and one for all.

Millions of people all around the world have been convinced and are ready to embrace socialism as the most effective system of governance. The Western capitalist governments, the US government in particular, do see the ideological shift among the ordinary people toward socialism and they do not like it. In fact, it scares them.

But it is too little, too late, because this pandemic has shown and proved to people all around the world that a socialist system of government looks after its citizens, whereas the capitalist system looks after a corporation's business interests and profits.

The author is a UK citizen living in China. The opinions expressed here are those of the writer and do not represent the views of China Daily and China Daily website.

How China set Oct 1 as its National Day

Watch it live: Ministers take questions at passage interview on May 22 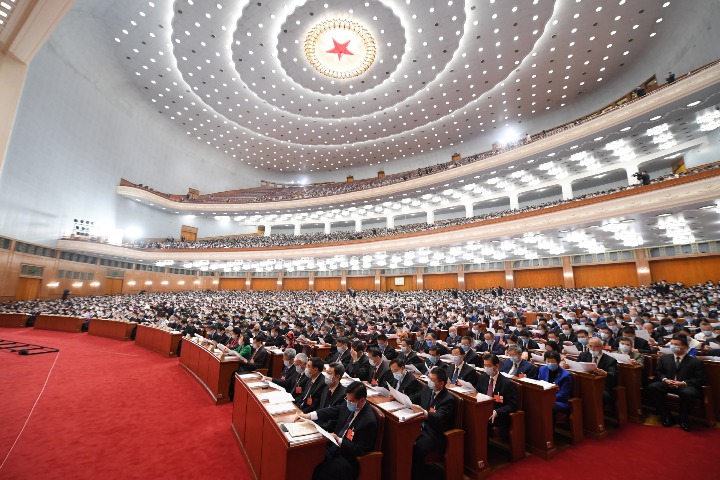