Editor's note: Jiang Jianguo, deputy head of the Publicity Department of the Communist Party of China Central Committee, delivered three speeches in Italy on Wednesday, a day before President Xi Jinping paid a state visit to the country. Following are excerpts from the three speeches:

Xi Jinping: The Governance of China, one of the most important works authored by President Xi Jinping, has been circulated in more than 160 countries and regions across the world in 26 languages and 30 versions since the publication of the first volume in 2014 and the second volume in 2017. The book has drawn wide attention and good response from readers.

As one of the most influential works by a leader in today's world, the book has opened a "window of thoughts" for the international community, making it easier for it to understand China's development achievements, motivations and prospects.

As important cradles of Eastern and Western civilizations, China and Italy have had great influence on the world. While reading the book, Chinese and Italian readers will find that the two countries have a lot in common in terms of national governance. China and Italy both have a long history with profound cultural connotations, and were once the "bright stars" of human civilization.

The book draws on the ideological wisdom born out of the progressive fruits of Chinese civilization and also from the achievements of the other civilizations. It establishes a new platform between Chinese and Italian civilizations to expand exchanges and learn from each other's governance experiences, which will strengthen the friendship between the two peoples and deepen the friendly relations between the two countries.

The ancient Silk Road started from Chang'an (now Xi'an, capital of Shaanxi province) and ended in Rome. An important aspect of Xi Jinping: The Governance of China is the elaboration on the Belt and Road Initiative. Over the past five years since the initiative was proposed, China has signed cooperation agreements with 123 countries and 29 international organizations, built 82 economic and trade cooperation zones in Belt and Road countries, created 244,000 jobs for the local people, and generated $2.21 billion in taxes and fees for the host countries. This means that the Belt and Road Initiative benefits the whole world.

The world is undergoing unprecedented changes. Although peace, development, cooperation and win-win results remain the overriding themes of the times, economic globalization has been encountering headwinds and humankind is at a crossroad yet to decide which way to go.

The book has clearly put forward China's plan on how to solve people's problems and build a better world, and expounded China's proposal of building a new type of international relations and a community with a shared future for mankind.

Although geographically far apart, China and Italy share a common principle of pursuing peace and development and common mission of building a better world.

It is hoped that through the study of President Xi's book, the two countries can better build consensuses, pool their strengths and lead their peoples to jointly build a community with a shared future for mankind.

Italy is one of the first European countries to build trade relations with China. The ancient Silk Road connected the two great civilizations. And some envoys of friendship such as Marco Polo, Matteo Ricci and Giuseppe Castiglione built a bridge of goodwill between the two peoples.

In recent years, the two countries have deepened cooperation in fields such as trade, science and technology, environmental protection and agriculture, bringing tangible benefits to the two peoples.

As a cradle of Renaissance in Medieval Europe, Italy has been a pace setter in design, and is synonymous with fashion. Clothing and furniture from Milan are among the best in the world. Italy is home to countless places of historical importance, grand opera houses and theaters, fantastic soccer stadiums and players, gourmet food and fabulous designs.

Italian designs are a perfect combination of the classical and the modern, and occupy a unique position in the world. Chinese designs are gradually becoming prominent thanks to the rapid economic development since the launch of reform and opening-up four decades ago.

Chinese designs share similar concepts with their Italian counterparts in that both attach significance to learning from the distinguished creative ideas of other countries and develop on the basis of their own traditional culture and aesthetics so as to continuously make innovations and create their own special styles and characteristics. No wonder they have been well received both at home and abroad.

"Design China" exhibits more than 100 original works from China, all of which have profound historical and cultural Chinese characteristics. Visitors can see the latest achievements of Chinese design, experience Chinese designers' creative ideas and craftsmanship, understand Chinese people's pursuit for a better life and their sense of happiness and sense of gain.

I believe designers and artists from the two countries will take the opportunity to learn from each other's skills and inspirations, which can promote bilateral cooperation in design and other humanities fields, and make contributions to deepen the understanding and friendship between the two peoples.

Italy has been working with China to promote free trade and economic globalization, even under the framework of the Belt and Road Initiative, albeit unofficially. Italy joined the Asian Infrastructure Investment Bank as a founding member in April 2015, and has been helping in sectors such as port construction and third-party market development.

In August 2018, Italy established a special work group on China in its Ministry of Economic Development, which became a new, important platform for bilateral cooperation in trade, investment and research. In fact, Italian leaders have been voicing their willingness to co-work with China, even under the Belt and Road Initiative framework.

The two countries, however, have to strengthen mutual understanding and mutual trust to promote cooperation among their media outlets. To do so, China has to promote the philosophy followed by its media outlets, which basically have four characteristics.

The second characteristic is truthfulness. Truth is the basis of journalism. China stresses that media outlets follow social and moral ethics to enrich people's knowledge about what has been happening in the country and around the world.

The third is the sense of social responsibility. Media outlets should act as platforms for exchanging social opinions, and China stresses that they perform this job with a sense of responsibility.

And the fourth characteristic is inclusiveness. Thanks to the rapid economic development of China and its policy of inclusive global development, Chinese media outlets are gaining influence across the world by interacting with people overseas.

I hope the Chinese media outlets will improve their sharing experience with their Italian counterparts, and wish the dialogue between them yields positive results. 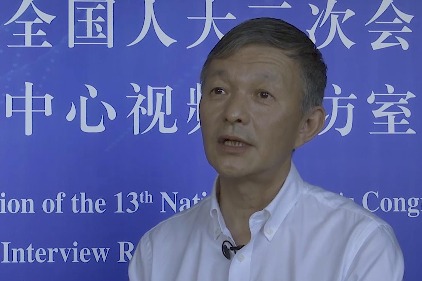 Employment is the priority in China's recovery
China Views